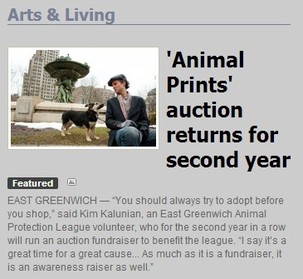 On the eve of the event, the South County and North East Independent newspapers delighted us with this wonderful feature on Animal Prints. Chock full of information, the story has quotes from volunteers, models, our photographers and even the people who run Crestar Picture Framing! It's certainly a must-read. Click here to see the full story.

A big thanks to Michaela Johnson and the crew of WPRI's "The Rhode Show" for having event coordinate Kim Kalunian and EGAPL President, Tammy Flanagan, on to talk about the League and Animal Prints. Watch below: 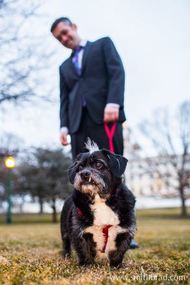 Ted Nesi, the man behind Nesi's Notes at WPRI.com, included Animal Prints in his immensely popular political column on Saturday, April 6.
Nesi, a political reporter that's gotten recognition from top publications like the Washington Post and Politico, took his photograph in front of the State House...how apropos! Check out the adorable shot (at left) that Brad Smith snapped of Ted with Joey during his shoot.
Click here to read his Saturday Morning Post, we're item eleven! 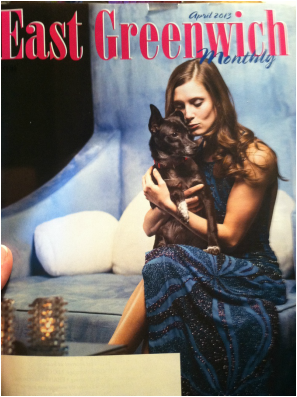 We're on the cover! Well, Amanda Ruggiero and Lily are on the cover! Check out this stunning shot at the NYLO Hotel by Brad Smith. WOW!
Thanks to editor Kate Phillips for selecting us to be on the cover of the April issue of East Greenwich Monthly, a popular magazine that gets delivered to homes across EG and makes its way to nearly every coffee shop in town.
East Greenwich Monthly is a free publication, so put your paws on one before they're all gone. The interior of the magazine has a beautiful, full-color spread featuring pictures of Tony Estrella from the Gamm Theatre and Michaela Johnson, co-host of The Rhode Show. 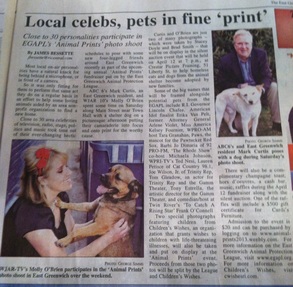 The East Greenwich Pendulum joined us for our final shoot on Saturday, March 31 and snapped some great shots of models Molly O'Brien, from WJAR, and Mark Curtis, from ABC 6. Pictured with them are Bolt and Dixie, who have both been adopted by loving families!
The event got a preview on the front page of the April 4th edition (available around EG), and prime real estate on page 3 of the paper! 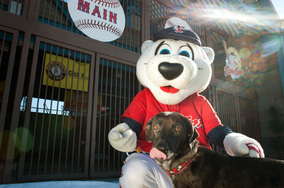 Thanks to Jessica Botelho and the Warwick Beacon for highlighting our event with a front page story! Read the full story here. 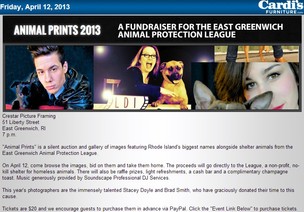 Thanks to Cardi's Furniture for including us in their community calendar! Check out all of their listings (including ours!) here. 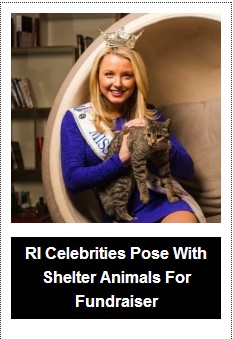 Thanks to GoLocalProv for highlighting us! Read the full feature here. Pictured is the lovely Miss RI America 2012, Kelsey Fournier! Photo by Brad Smith.

Thanks to the Sandra Feinstein Gamm Theatre for a shout out in their March 7 newsletter. Another big thanks to Gamm artistic director Tony Estrella and actors Tom Gleadow and Steve Kidd for participating. Photo of Tony (at left) by Stacey Doyle.
Powered by